Apple Inc. will use a special media event on September 5th to introduce a new array of digital media offerings, according to digital invitations issued to analysts and members of the media Tuesday afternoon.

The invites, which arrived by e-mail, depict an enlarged CoverFlow interface with the caption, “The beat goes on.” The wording appears to have been borrowed from the trailing line of The Beatles’ final press release, which was issued by Apple Records on April 10, 1970, following the band’s split.

Apple’s event is scheduled to take place at the Moscone West in San Francisco on September 5 at 10:00 a.m.

Apple is widely expected to use the gathering to usher in a new breed of Mac OS X-based iPods. Additional announcements relating to the company’s iTunes software and digital media download service are also expected. More information to be followed. 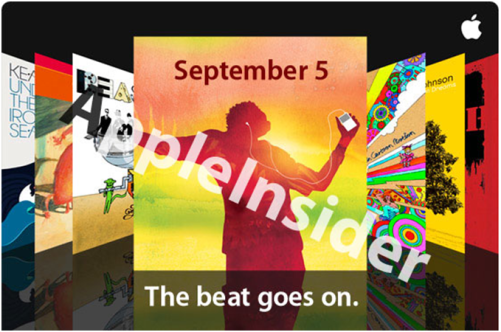